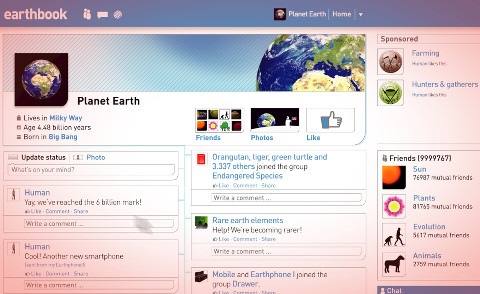 “Earthbook” is a short animation produced for "The Year of Science“ to raise awareness for the topics of sustainability among digital natives. What would Planet Earth post about humans on its profile? The Earth fast forwards through a virtual relationship with humans - but soon starts to ask itself whether it wants to be friends with a species that exploits its national resources.

In the first three weeks the animation received more than 250,000 clicks on Youtube and has been commented more than 1,700 times. It was nominated for Deauville Green Award 2013 and received a honorable mention from My Hero Film Festival 2014. Earthbook was shown at Guerilla Science Festival, at international short film festival berlin 2013 and at Greenstormin Film Festival 2014 in Freiburg. The animation was also part of the official selection of 2013 Adventure Film Festival in Boulder (Colorado) and of San Francisco Green Festival 2014.

We are happy to develop ideas with you on how to make your scientific findings and innovative concepts for sustainable futures impactful.